The Rose Window, often associated with great cathedrals, is not named because of its color but because of its shape which resembles a rose in full bloom. The predominant color is a rich, brilliant blue, with flashes of red, gold, and harmonizing colors. The outer border is symbolic of the creation, the heavens, and earth.

The central theme of the large, twelve-point North Rose Window is the New Testament and the Great Commission. The Rose Window

’s message is to tell the story of Christ to the world.

For this reason, approximately three feet from the window's center, beginning at the seven o'clock position and running clockwise, is the verse:

Go ye into all the world and preach the gospel to all people. 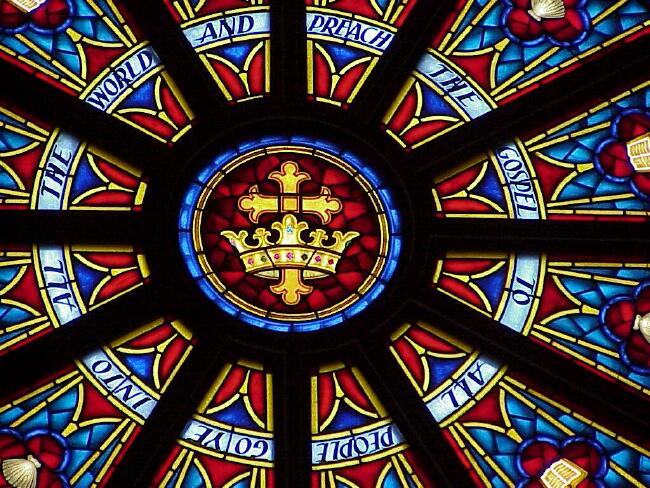 At the center of the window is the cross and crown, a symbol of Jesus Christ.

An open Bible and a scallop shell, signifying the Apostles' mission to preach and baptize, are alternated within the inner petals. 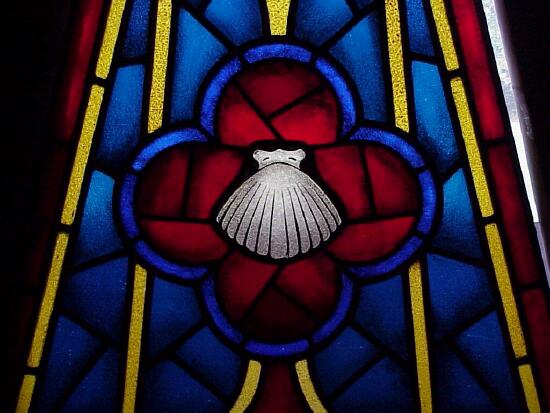 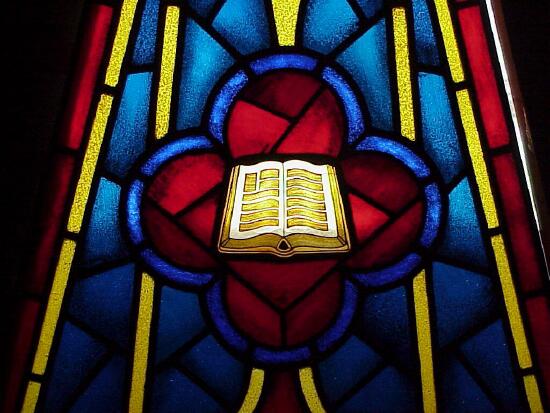 The twelve rose petals contain the symbols of the Apostles with Matthias having been substituted for Judas. Starting at the upper right (at one o'clock) and proceeding clockwise, they are as follows:

Tradition says that while Andrew was preaching in Greece, he was put to death on this "X shaped" type of cross. The anchor symbolizes the fact that St. Andrew was a fisherman, who had been a disciple of John the Baptist, before becoming the first-called of Christ's twelve apostles. 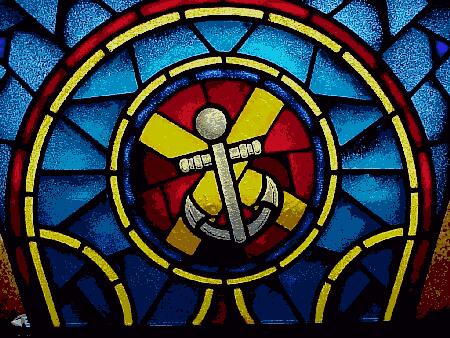 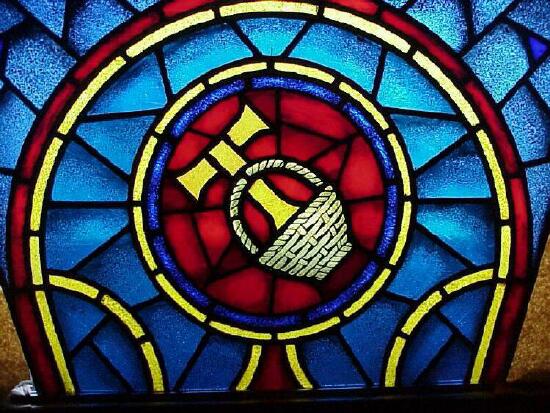 A cross and basket of bread symbolize Phillip because of Phillip’s remark when Jesus fed the multitude. John 6:7

Thomas and James the Lesser:

Carpenters square, spear & arrows. Thomas is said to have built a church in India with his own hands, and later he was persecuted there and killed with a spear by a pagan priest. 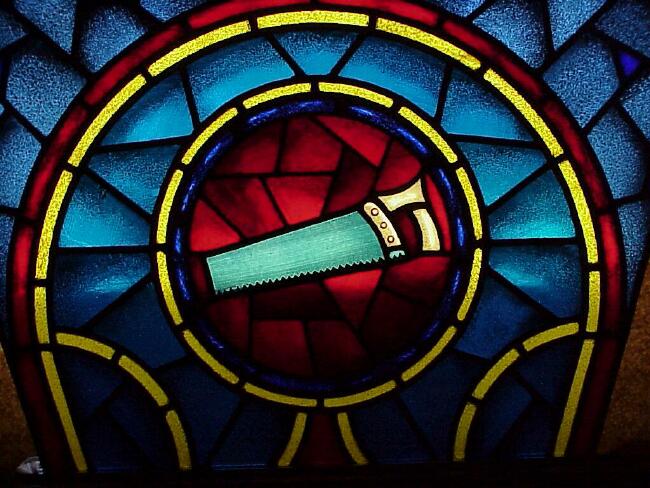 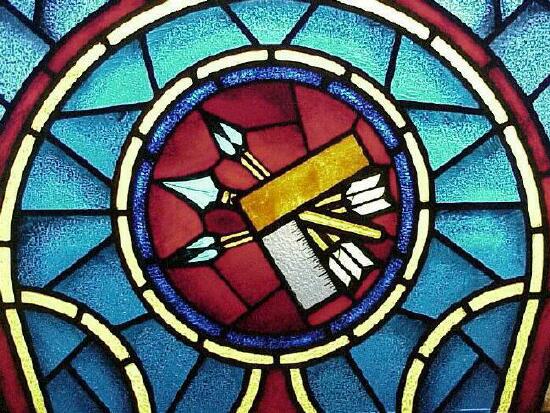 James the lesser is represented by a saw, because it is said his body was sawn asunder after a horrible martyrdom. 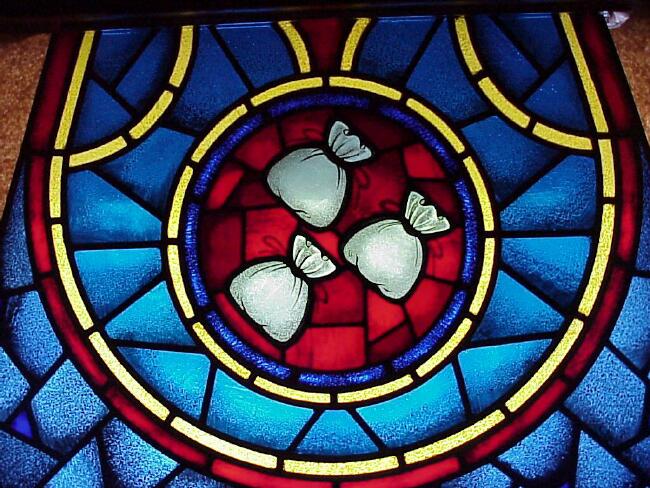 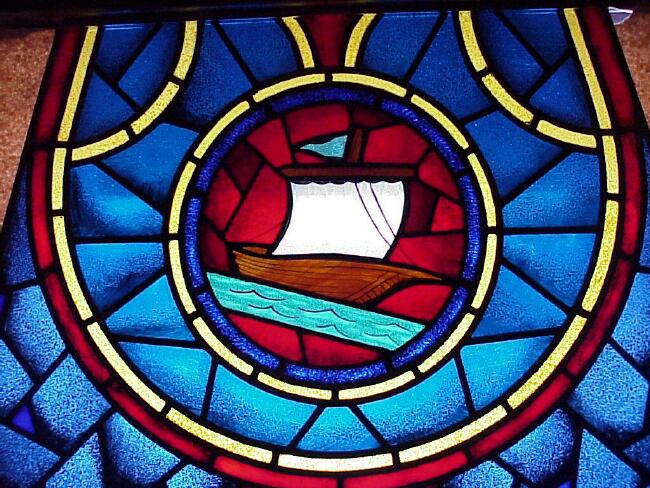 Jude traveled far on missionary journeys in company with Simon, according to tradition, hence the ship.

A fish and a boat hook, because through the power of the Gospel, Simon became a great fisher of men. 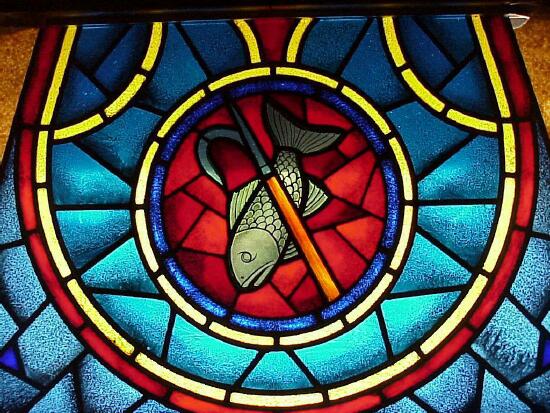 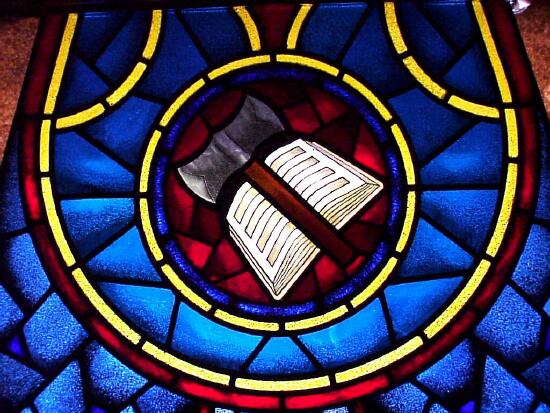 Chosen to take the place of Judas, Matthias is symbolized by an open bible, and a double bladed battle-axe. He is said to have been beheaded after his missionary work.

Peter and James The Greater:

The crossed keys recall Peter’s confession and our Lord’s gift to him of the keys of the kingdom. Matt. 16:18,19. 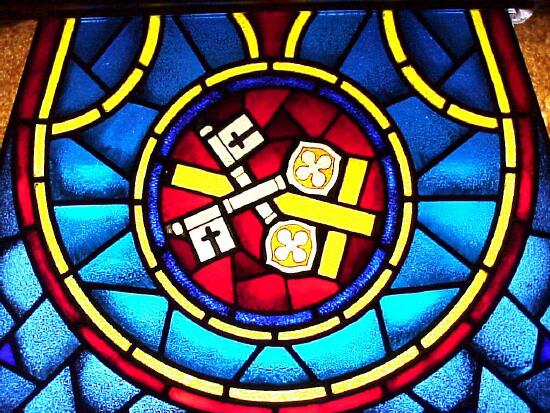 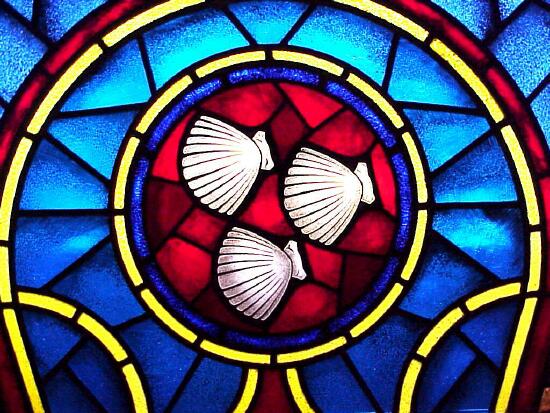 The scallop shell is the symbol of pilgrimage and baptism, and stands for James The Greater's zeal and missionary spirit.

Early writers said that John once drank from a poisoned chalice and was unharmed. Jesus once said that John should drink of His cup. Thus the snake & chalice as symbols for John. 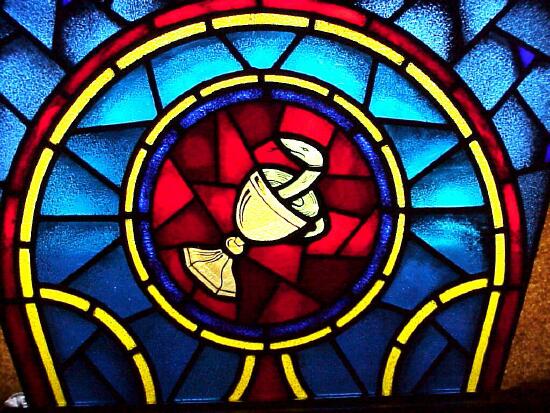 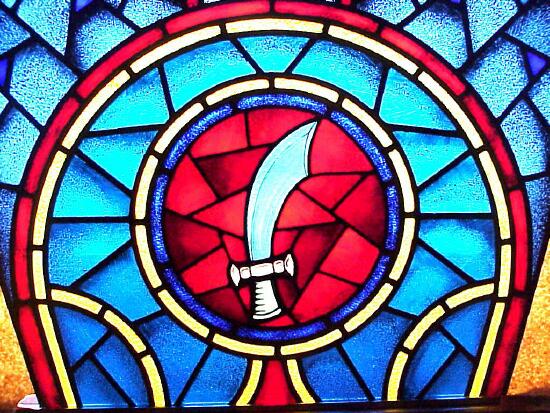 Bartholomew was said to have been flayed alive, hence he is usually represented by one to three flaying knives.

Photos and designs, unless otherwise noted, by V. Berthelsdorf & © by Kaleidoscope Glass Works 2002.